SOMERVILLE, NJ – Like the Fat Tuesday Mardi Gras masks that adorn the walls of his popular restaurant every year, Rick St. Pierre has several personas.

He is the unofficial ‘mayor’ of Main Street; an unflinching catalyst for change; a philanthropist and supporter of good causes; a well-connected resource who always knows who to call for answers; an astute businessman who always seems to have a workable solution, and a one-man welcome wagon eager to help new businesses share in the success story that continues to unfold on Main Street.

Verve Restaurant & Bistro is where you’ll find St. Pierre some mornings, sitting outside with a cup of coffee reading the New York Times. Built in 1905, he lives on the third floor of the historic building at 18 E. Main St. directly across from the historic Somerset County Courthouse and an easy walk from the county administration complex.

But he’s not there for long. There is always a long list of things to do.

His ever-growing circle of friends and regulars at the French bistro has anointed him the town’s ambassador of good will in recognition of his never-ending good deeds.

The “regulars” are a “Who’s Who” of Somerset County and beyond – businessmen and women, executives, state and local officials, lawyers, mayors, artists, writers, musicians, local residents and people who drive hours to get here. 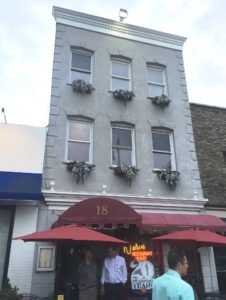 This weekend, they’re all coming together to help Verve celebrate its 20th anniversary – there will be live jazz and blues, specialty drinks all 4 days and on Sunday, “Verve Cage,” a drag queen competition mimicking the movie “Bird Cage,” held as a fund raiser by the Democratic Party in support of LGBT initiatives.

By extension, the four-day anniversary celebration also recognizes the civic contributions St. Pierre has made in Somerville since buying the former Court Café building.

More than a few of the “regulars” liken him to that drum-thumping advertising bunny – he just keeps on going.

“I don’t know where he gets his energy,” said Ray Brown, executive director of the Somerset County Park System, a charter member of the Verve family. “He’s one of a kind, that’s for sure.”

“One of the reasons that Somerville is coming together is because of people like Rick who are willing to extend themselves,” said Mike Kerwin, president & CEO of the Somerset County Business Partnership.

Four generations of Kerwin’s family have been involved in the tavern business; hospitality, good food and drink are things he understands first hand.

“’Verve Style,’ whatever that is, has been there from the very beginning,” Kerwin said. “It’s a place you want to go to. There’s a sense of belonging, an extended family, not unlike a tavern, but he’s taken it to the next level, he’s added something special to it.”

Verve Style is contagious, variously described as edgy, urban, warm and friendly, imbued with a sense of family and belonging. St. Pierre said “it” was already here when he bought the building from John Kitchen. The Court Tavern was “the” place to be long before St. Pierre stumbled upon the building when he was searching for a suitable location to open his own restaurant.

“It existed before me, it just happened to find me,” St. Pierre said.

The affable restaurant owner rarely looks back because he is focused on looking ahead, anticipating, planning and working to make Somerville a better place to live and do business.

“You can’t separate the two; Rick is Verve and Verve is Rick,” offered Mayor Brian Gallagher. “Verve has become iconic; my kids from a young age called him Mr. Verve; they still don’t know his real name,” he added. “Most importantly, he’s a really nice guy,” Gallagher said.

“He never turns it off,” said Tom Genova, chairman of the Downtown Somerville Alliance.

“He gets it, from the day he got here, he hit the ground running, and it shows,” Genova added. “If you’re going to be on Main Street, you have to be part of the community, willing to give back, working as part of a team. Rick recognizes that,” Genova added.

“He has the strongest sense of community of anyone I know – it shines through in every single thing we do. His love and commitment to both downtown Somerville and his Verve Family (aka Verve Patron Saints and Sinners) is truly what makes Verve thrive and sets him apart from everyone else,” said Dina Portik of Raven Design, who has worked with Rick for 15 years on marketing and advertising and helps to perpetuate the “Verve style.”

“I like to call him the man behind the curtain,” Portik added. “He never wants to take credit, he just does it for the love of it – he wants to take care of everybody else. It’s not about him, it’s about serving the people and the community.

“He wants success for everybody; he deserves all the kudos he gets, that’s for sure,” she added.

“His eyes are everywhere, he’s looking at everything. He’s unselfish. His attitude is ‘If I thrive, the next person thrives and the town thrives.’

“Rick is the most giving person that I’ve ever,’’ Pitts adds. “He’s always looking for ways to help, to lend a hand.

“Verve is Somerville,” Pitts adds. “Verve has always seemed to thrive. It is the pulse of Somerville, you don’t get to know Somerville unless you go to Verve; it’s like the heart beat of the town.”

Rich Reitman, who runs his own marketing and public relations agency in the borough credits St. Pierre with the resurgence of downtown Somerville.

“He’s been the catalyst in Somerville for the last 20 years; he’s been involved in everything that has gone on to make Somerville good.

“Rick knew what he needed to do to make Somerville work and he worked very hard to make sure that happened,” Reitman added. “He volunteered for committees, took leadership positions, and he has a very aggressive business sense. Nobody did it better.

He’s worked hard to draw people into his restaurant; he put his money where his mouth is. He does an awful lot for charities. He understands that in order to be a successful business you have to be a community guy.”

Sitting alongside Reitman at the popular bar was businessman Phil Decker.

“Verve has grown as the community has grown, it’s nurtured the downtown; as Verve goes, so goes the downtown. It’s an amazing symbiotic relationship.

“Rick is the ultimate proprietor,” Decker added. “He cares about the community and the people. He’s not in this for any political gain or personal gratification. He just wants to make Somerville the best place possible.

“There are a handful of businesses in town that are sparkplugs for Main Street and Verve is one of them,” Decker said.

“Pretty much everyone in town knows Rick,” said Shaun Daley. He and partner Michelle Mundt had the grand opening of their Gallery on Main antiques, art gallery and restoration shop last week.

“He is nothing but generous,” Daley said. “He made the offer, he wanted to donate the food for the grand opening; he said ‘leave everything to to me.’ He and his staff brought the tables, delivered the food and set it up, it was absolutely fantastic and we couldn’t be more appreciative of what he has done for us,” he added.

As chairperson of Arts On Division St. Pierre he has worked to bring a dynamic of arts and culture to downtown Somerville. Founded as a three-day festival in 2007, Arts on Division has grown into a 501c non-profit that hosts numerous community-oriented events throughout the year.

St. Pierre has worked as the chairman of the Downtown Somerville  Allliance events committee and currently holds the position of Financial Officer.

He hosts a Crab Fest each August to benefit various local non-profits, a Mardi Gras event to benefit the Matheny Medical and Educational Center, is active with the  Taste of Somerville,  the  Tour of Somerville, and a supporter of many of the 5K road races in the borough.

Serving as board member for the Law Foundation of Somerset County, he developed  the Meet the Chefs event to benefit the foundation.

Verve has earned both national and statewide recognition; first when Verve mixologist N. Bryan Mack demonstrated his cocktail “The Carlos Slim” live on the event floor at the Star of the Bar Mixology Competition International Wine,Spirits    & Beer Event 2014, and again as a finalist in Pete Genovese’s/NJ.com “Best     Bars Competition”  in 2015.

St. Pierre has received numerous awards; the  2008 Small Business Economic Vitality Award, Somerville Citizen of the Year in 2011 and the Humanitarian Award from the  Resource Center  of Somerset in 2012.